Update on the Canadian Forces’ Activities in Niagara 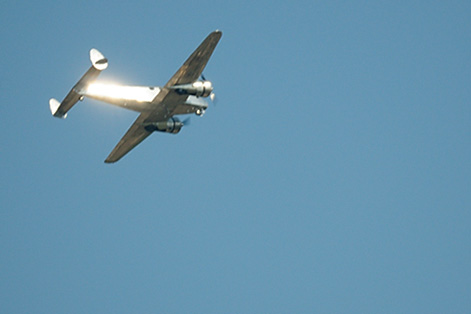 The mystery plane with markings suggesting it's Canadian military.

Two posts ago, in Weekly Photo Challenge: Fall, I showed you some pictures of what I believe to be a Canadian Forces aircraft expelling two parachutists. These photos were taken in April of 2009 and haven’t seen anything that I though was a military aircraft since… until this week.

Two days ago, or four days after posting the parachute pictures, another aircraft large enough to pry me out of the house to take a look buzzed my neighbourhood. Again, it’s an hour’s drive to the nearest international airport and the regional airport is too small to accommodate anything that John Travolta owns and flies so the sound of anything big or fast flying around brings out the vertical rubbernecker in me.

During the first pass that got me out the front door and into my front yard (the same place from which I took the parachuting pictures) the plane went right over HoaiPhai Manor, the stately digs of this blogging raccoon. By the time I entered the house, fitted my camera with Hubble Jr. (a Reflex-Nikkor 500mm f/8), and got back outside, the silver bird was gone. Usually anything flying around that is not single-engined or an airliner flying at 40,000 feet swoops around and makes a couple of passes, so I decided to hang around for a while. 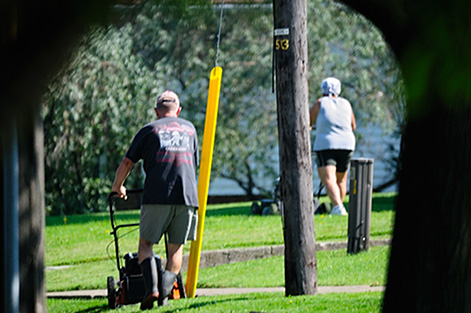 The evil neighbours whose lawnmowers' drone drowned out any clues as to the mystery plane's location.

It’s a fairly quiet neighbourhood so you can usually hear aircraft a long way off. However, two of my neighbours had chosen this particular time to mow their lawns so I had to stand there on my driveway with a camera equipped with a large lens around my neck for around half an hour. During this time one of the female college students that rent the house next door to mine left the house and headed toward the bus stop. I was, naturally, scanning the sky over her roof with my camera when she left. I must have looked like a voyeur who was trying to get a couple of shots of her or her roommates through their window because she gave me the kind of sideways glance women give men they don’t want looking at them. After decades of receiving this look, I have earned the equivalent of a Black Belt in recognizing this expression of feminine disdain. 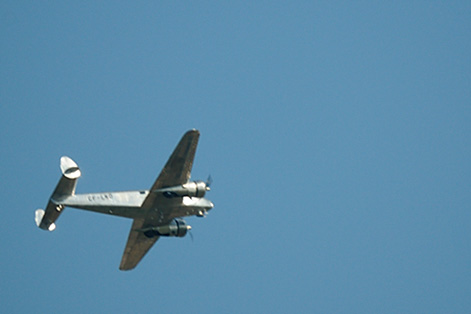 The markings say CF-LND, suggesting it belongs to Canadian Forces, but I could not make out a roundel. Isn't this the same plane that Humphrey Bogart put Ingrid Bergman on in the film "Casablanca"?

My patience and lack of desire to get roped into being assigned housework duties indoors paid off — the plane returned. This time it was really far away, much farther than the parachutists’ plane was, but I managed to snap off a couple of pix.

For you shutter geeks out there, all photos on this page were taken handheld with a Nikon D300 with a Reflex-Nikkor 500mm f/8. The photos of the plane are cropped — they are a quarter of the original frame. 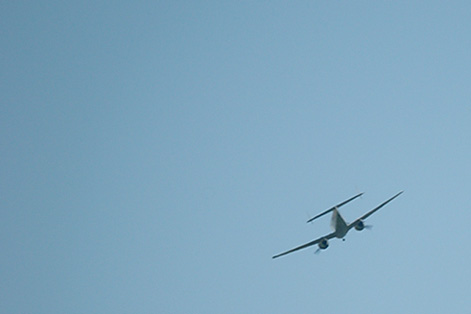 I'm up late digging up the dirt. END_OF_DOCUMENT_TOKEN_TO_BE_REPLACED
This entry was posted on Friday, September 30th, 2011 at 10:55 and tagged with Canada, humor, humour, military aircraft, Niagara, Ontario, Photography, Reflex-Nikkor C 500mm f/8 and posted in News, Current Events, and Modern Times, Photography. You can follow any responses to this entry through the RSS 2.0 feed.
« TV Time Review: “Man with a Camera”
Weekly Photo Challenge: Sunset »

10 responses to “Update on the Canadian Forces’ Activities in Niagara”