Stump in the Water (not a Deep Purple song).

While out at a pond with my family, I was intrigued by all the life and activity just below the surface of the water around this inert stump but I was being called to join the rest of the people I was with so I didn’t take the time to put a polarizer on the lens. As is often the case, what I thought would be a “good enough” picture just wasn’t after I uploaded the day’s images to my computer and took a closer look. So I decided to do some tweaking. 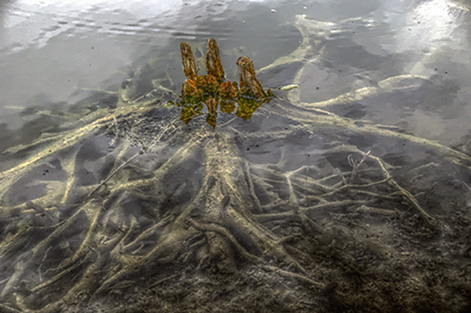 There was so much more going on below the surface.

Interesting, eh? The way I got the details of what was under the reflective surface of the pond was by applying the high dynamic range imaging (HDRI) techniques to a single image. Usually you use this technique quite deliberately after careful planning that involves putting your camera on a tripod, taking several shots at different shutter speeds so you properly expose both details in the highlights and shadows (and everything in between), and then feed all the images through a special computer program. When you apply HDRI techniques to a single source image, the resulting HDRI image is sometimes referred to as an FHDRI, or Fake High Dynamic Range Image.

Same pond, another stump. Actually, I kind of like the image as-is, but I just can't seem to leave well enough alone! Look for the FHDRI-processed version of this image farther down in this post.

I think this looks like a volcanic island patrolled by giant tadpoles and minnows.

So, there you have it. Run out now and make your own HDRIs and FHDRIs. Don’t forget to post the results and let me know about them!

See you next week.