A photo of my home work environment taken while I was slapping together this very post. The two printers at the sides of this image had very little to do with it but the monitor, the mouse, the keyboard, and especially the coffee were central to getting this post up and to the people.

First of all, I would like to break from the tradition began by similarly illustrious awards, such  as The Academy Awards, The Golden Globes, and The Darwin Awards, by starting my seemingly endless babble by thanking those I wish to thank for making me thankful for this distinction that thanks me for the thousands of thankless blogging hours I’ve put in, sometimes just typing up a single post.

I would first like to thank Badlands Badley for nominating me. Nathan was the very first person to comment on my blog, encouraging me only 33 days after hitting the publish button on my groundbreaking “Hello World” post with his kind words reassuring me that using that default title was “undoofuslike”.

Since that fateful first post, I’ve grown as a blogger. That first post showed me that the WordPress crowd that comments on others’ thoughts is not the adversarial bunch I came across in the dog-eat-dog world of tagging my opinions to the ends of news stories.

My posts have grown, too. All the tedium and banality I managed to pack into that maiden post of just 771 words I can now craft into lengthy sleep-inducing posts of up to 8,500 words. That’s an eleven-fold growth in less than a year of blogging! Similarly, my entire blog gets around eleven times the daily hits per day compared to my early days here (but I’ve posted about 60 posts, so it looks like interest per post per day has actually fallen like a sailor on leave off a bar stool), sometimes getting numbers of visits in the double digits. Coincidentally, an 11:1 ratio figures prominently in the post I was going to put the finishing touches on and post today, but I’m writing this instead.

But just who is Badlands Badley? Nobody knows for sure. The best we can do is visit his blog, read his words, sniff out whatever he says is true facts about himself, and construct an image that will satisfy our brains’ desires to put a face to the words.

But the thing is, I just realized that I am supposed to tell you seven true facts about myself, not the person who nominated me. My problem is, I’ve already been nominated for these type of awards a few times. While they’re fun, I’ve already told you about all the interesting things (real or made up) about me, so please excuse the poor quality of the following list, which is part true and part baloney. 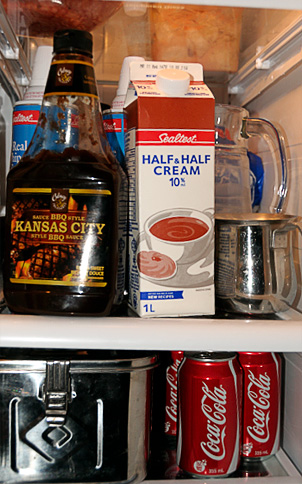 Proof positive that I actually have Kansas City BBQ Sauce (upper left corner) in my fridge.

Now on to the matter of passing the One Lovely Blog Award torch on to others. According to Nathan, he was supposed to nominate ten people, but got himself off the hook by nominating only six, and auto-bestowing to the first four people who commented on the post. Following his lead, I think I’ll try something new and nominate the latest ten Freshly Pressed blogs. The reasoning behind this is that…

So, without further Mountain Dew, I present this coveted award to:

I’m not going to contact them directly… they’re probably too busy answering the scads of comments that tend to accumulate when you’re Freshly Pressed, so I’ve heard. Hopefully they’ll notice the ping-backs and get right on dishing out awards of their own!

That’s all for now, folks. Please do visit my winners above!

I'm up late digging up the dirt. END_OF_DOCUMENT_TOKEN_TO_BE_REPLACED
This entry was posted on Saturday, February 4th, 2012 at 08:52 and tagged with Blogging, One Lovely Blog Award and posted in Awards, News, Current Events, and Modern Times. You can follow any responses to this entry through the RSS 2.0 feed.
« Happy Australia Day!
Super Bowl Curry »

10 responses to “My “One Lovely Blog Award” Acceptance Speech”