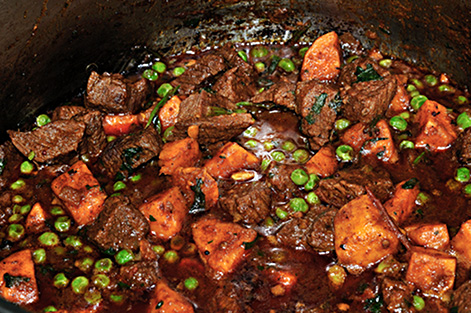 So today is Super Bowl Sunday — the dread of many a wife to football fiends. This post is dedicated to you poor damsels who must endure hour upon hour of testosterone-fuelled chants at an unhearing television. The only way to muffle the orders to professional athletes being barked by your husbands is to fill their mouths with food and drink. And believe you me, you will be called upon to serve vast quantities of heavily-spiced food.

Most of the dishes requested will be finger food that is easily eaten while your men are perched at the edge of the sofa scrutinizing every play. But you can undermine hubby’s friends’ plan to remain eternally in your living room. Serve one sit-down course so they’ll be forced away from the TV — if they cannot see it, they cannot yell at it.

I suggest a nice curry for the lads. It fulfills the spice requirement and has the added effect of filling the belly, increasing the feeling of satiety even after one ceases swallowing its savoury goodness. Perhaps this piquant potion will reduce their overall consumption. In addition, I have heard reports that a good Indian curry tends to impose a certain pressing physiological requirement within a few short hours on those not those not used to its complex mixture of exotic spices. In a word, a nice curry will put the “bowl” in Super Bowl Sunday for a few of your guests, hastening their departure. Everyone enjoys a “home field advantage”, do they not?

I used to make a lot of curries from scratch, blending many spices from the East in careful ratios. But I stumbled upon a shortcut by the name of Patak. The Patak company blends the spices for you, reducing your burden while increasing the probability of your getting it right! With the help of kind Mr. Patak, you can serve an award-winning meal your guests will rave about long after their hangovers are forgotten.

Here’s what to do…

This is just an example of the kind of curry you can make. You can also use any kind of meat, including ground meats — ground lamb is fantastic in curries! You can also use sweet potatoes, add peanut butter, coconut cream or coconut butter, or other vegetables. If you’re really creative, try using ingredients that are your home team’s colours!

Have a great Super Bowl Sunday!

I'm up late digging up the dirt. END_OF_DOCUMENT_TOKEN_TO_BE_REPLACED
This entry was posted on Sunday, February 5th, 2012 at 00:01 and tagged with food, football, Indian food, recipe, sports, Super Bowl and posted in Food, News, Current Events, and Modern Times, Real Edible Recipes. You can follow any responses to this entry through the RSS 2.0 feed.
« My “One Lovely Blog Award” Acceptance Speech
Mr. Romance’s Guide to Being the Perfect Husband on Valentine’s Day »