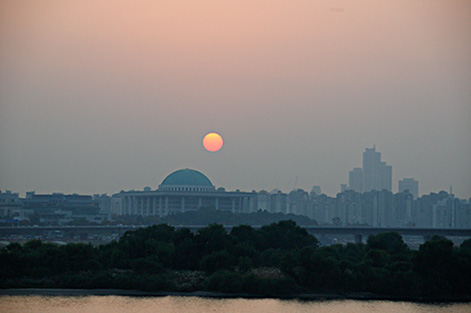 After about 24 hours of being in transit, I took this photo from a moving car just after having been picked up at the airport. The camera and the 18-200 got a fairly good shot in spite of my exhaustion. That's the South Korean Parliament building with the domed roof under a Seoul sunset.

About the Recumbent Reviews

Welcome to the fourth Recumbent Review!

This series of articles examines photographic equipment and accessories from an ordinary user’s point of view. You’ll find none of that snooty “I’m an expert so my opinion is the final word” guff you get from the professional reviewers you’ll find elsewhere on the interwebs. I’m too lazy and inept to go into a detailed technical analysis involving resolution tests, discussions on acutance, or anything else involving experimentation, exacting measurement, or a scholarly comparison with other equipment, but I’ll certainly not hold back on opinion and speculation. Ranting and raving are par for the course!

Hopefully you’ll enjoy yourself while learning all about stuff that will help you take better pictures and cost you money you should be putting toward your children’s college fund or something pink and frilly for your wife (or husband).

This not-so-exotic lens next to a standard can of Coke. They are about the same size but the lens is almost 60% heavier!

I know that what I am about to tell you is slightly twisted but in the interest of honesty between friends I am willing to risk losing your respect. Whatever you think about me after having read this, please do not tell Denise this story — I’m pretty sure it would break her heart and would most certainly change our relationship forever.

I first met Denise a few years ago indirectly through her big sister, D3, while I was still involved with a Nikon CoolPix 5700 named Cindy. Cindy was fun but not a very serious camera — she was slow to focus, had a fixed lens, and, with only 5 megapixels of resolution, she lacked depth. I was at the point where I saw that our relationship had no real future and began considering my options.

I took a trip down to a local fully-licensed (by Nikon) establishment after hearing about a new girl in town, the D3. The pixologist behind the counter pointed her out and introduced us. She was a gorgeous full-figured girl. Talk about “full-frame”… va-va-va-voom! Her stats spoke for themselves.

After a short while with her I realized that she was way out of my league. I’m a little embarrassed to say this but there was no way I could keep up with her lavish lifestyle. Being a full-framed FX format, she demanded the top-of-the-line haute-capture lenses at jet-set prices. She was a gorgeous pro but, frankly, I could not afford her.

Then the pixologist suggested that I consider Denise, a Nikon D300 and D3’s down-to-earth cousin. Her vital statistics shared a family resemblance with those of D3, having a slightly higher pixel count in fact, but being an APS-C DX format she would be less of a gold-digger. I liked what I was hearing.

When she and I first met, I was taken by her physical beauty. She had all of D3’s curves (including tonal response, if what the guys whispered about her was true) but was trimmer. You might think me superficial but I’m not a large guy and having a big girl on my arm all day might wear me out — Denise and I were a much better match. Some people say it all evens out in the darkroom but I’ve always believed that a human/camera relationship should be based on more than what happens once you turn out the lights, and Denise is a digital with no use for the darkroom anyway.

To make a long story short, Denise was unpretentiously accessorized with the 18-200 when I took her home to meet Mom. While not haute-capture, the 18-200 is no knock-off either — it was designed at Nikon’s atelier in Tokyo, but pieced together in a sweatshop in Thailand.

[If you don’t mind, I’m going to dispense with the sexual innuendo now… I don’t think I can “keep it up” all the way ’till the end of the post.]

What’s in a Name?

Why You Shouldn’t Get One

Why You’d Want One

The Nikkor 18-200mm VR with the included lens hood attached.

I figure the best way to explain this to you is to tell you about how my wife and I differ in our approach to buying produce… Mrs. HoaiPhai walks up to the tomato bin at the supermarket and settles in. She’ll scan the tomatoes and choose what she thinks is the best currently visible. While holding it in one hand, she’ll go through the bin searching for a better tomato, replacing the old best tomato she’s holding with a better one from time to time. After she’s satisfied that she has the epitome of tomato perfection, she’ll move on to the apple aisle and repeat the process. She does a lot of her shopping at stores with extended hours and I do a lot of my shopping at pharmacies with a wide selection of happy pills.

When I am alone shopping for tomatoes and am therefore permitted the luxury of making my own decisions, I walk up to the tomato bin and buy the first one that is large enough for my purpose that isn’t already rotten or showing signs of worm infestation. I’ll squeeze it a couple of times to make sure that it’s really juicy (for curry or pasta sauce) or firm (for salad or sandwiches). The time I save in the produce section I spend in the coffee aisle chatting it up with college girls who look like they’ve never shopped for groceries before and are confused by the vast selection of beans, grinds, and roasts. I’m very helpful that way.

The point is that I select camera equipment in very much the same way I buy tomatoes (although there are precious few college girls in the filter aisle of the camera store) — I figure out what my needs are and don’t bother torturing myself considering expensive optimum-quality special purpose goods that I cannot afford that would eat up my entire equipment budget while only filling a narrow range of needs.

I’m not swimming in money so buying top-of-the-line stuff would mean that I’d only be able to afford a couple of lenses and that would put serious limitations on the kinds of pictures I could take. In a sense I’ve resigned myself to buying used or “pretty good” stuff, trading highest-possible image quality for the ability to shoot slightly lower quality in a wider range of situations — I get more bang for my buck by getting cheaper stuff that will give me good pictures in more situations. Besides, I’m not the most highly skilled photographer around and I take pictures mainly for fun.

I’m not convinced that top-end pro equipment would make my photos much better anyways (but if someone wants to send me a pro lens, I’m willing to test this theory and eat my own words in case I’m wrong). I figure that somewhere along the way the photographer’s ability comes into play and even if the lens is razor-sharp, a mediocre photog like me would likely mess the image up somewhere between tripping the shutter and printing. Similarly, Mrs. HoaiPhai and I love to cook but whatever nominal quality advantage her tomato has over mine is not likely to make one lick of difference at the end of the day in our amateur spaghetti sauce. That being said, if I win the lottery you can look forward to me reviewing digital Hasselblads and/or technical cameras with scanning backs.

So with my general purchase philosophy hanging out in the wind for everyone to see, here are a few reasons why the 18-200 might be the right lens for photographers who share my skill level, needs, and budget. 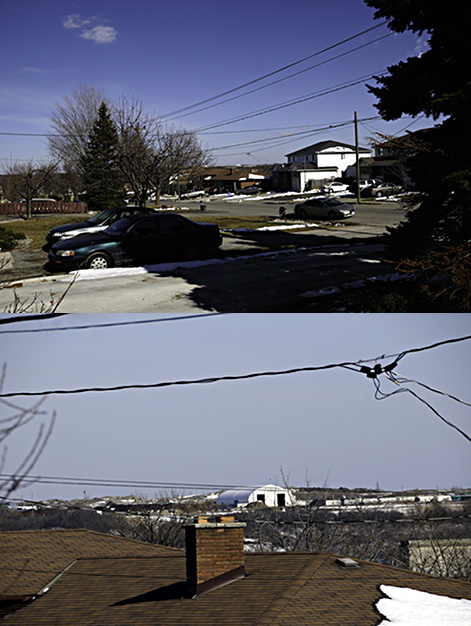 The two images above demonstrate the 11 x zoom. The chimney and the utility shack shown in the bottom image can be seen in the center of the top image. That’s an incredibly wide range of magnifications!

A neighbourhood turtle or tortoise.

I came upon this shelled guy while taking a walk…

A small section taken from the previous turtle (or whatever) photo.

Above is the closest thing to an empirical test you’re likely to see in one of my Recumbent Reviews. Because my D300 has a resolution of 4288 x 2848 pixels and I post horizontal shots on this WordPress theme at 471 x 313 pixels, only 1.2% of the original image information ends up being displayed. So what I’ve done here is take a 471 x 313 pixel section of the full-sized image and posted it to show you some of the finer detail that you’re missing when I downsample my images. So here we can see that the 18-200 preserves a lot of detail from the original scene.

These buffalo were shot from the window of a slowly moving car.

This shot was taken at 1/20 second with the lens zoomed in to 200mm. Because my camera’s an APS-C sensor job, the 200mm becomes 300mm in 35mm equivalent. The traditional rule of thumb is the slowest speed, in seconds, you should shoot at handheld is the reciprocal of the focal length, otherwise your image is likely to be ruined by camera shake. So 1/20 of a second is 4 stops slower than the recommended speed, a sterling tribute to the lens’ Vibration Reduction system. I did take two other shots at the same settings but they were not as good as this one in terms of lack of camera shake. 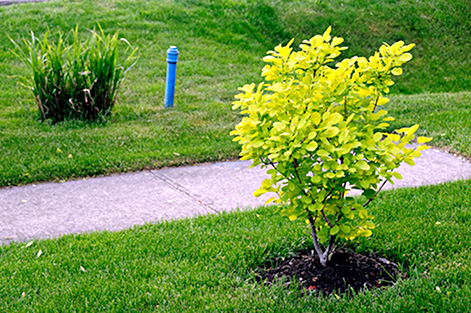 My 18-200 is a pleasure to use because the wide zoom range allows you to pick your perspective and then zoom to frame your subject. 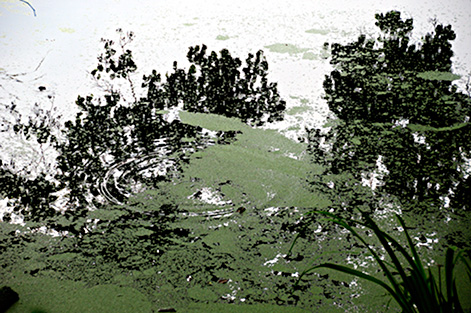 Sharp and contrasty... not bad for a "kit lens". 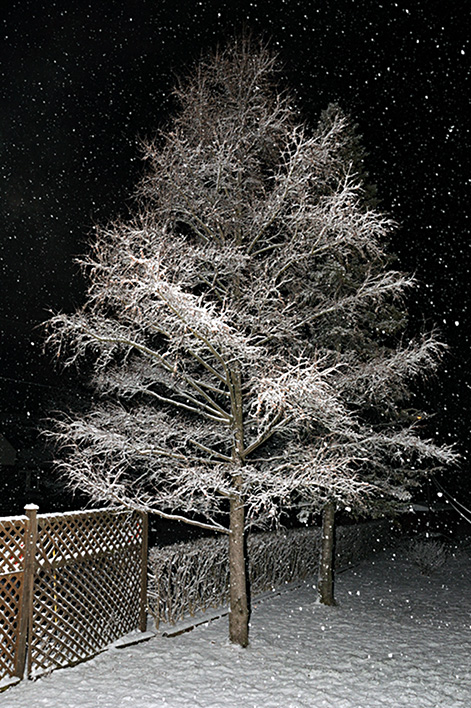 The very essence of the Recumbent Reviews... a shot taken out the back door while I was in my pyjamas.

In my book, this lens ranks as “Hard to Imagine Life Without It” on the HoaiPhai Scale of Camera Stuff Approval, even though nobody will contest your will to get their hands on it. Here are some of my reasons for giving it this rating…

If you liked this Recumbent Review, read the others in the series:

I'm up late digging up the dirt. END_OF_DOCUMENT_TOKEN_TO_BE_REPLACED
This entry was posted on Wednesday, February 22nd, 2012 at 02:13 and tagged with AF-S DX Nikkor 18-200mm 3.5-5.6G ED VR, D300, humor, humour, Nikkor, Nikon, Nikon DX format, Photography, review, Zoom lens and posted in Photography, Raves, Recumbent Photographic Reviews, Recumbent Reviews, Reviews. You can follow any responses to this entry through the RSS 2.0 feed.
« Confessions of a Pigtail in Ink Dipper
I’m Looking for Work and I Need Your Help »